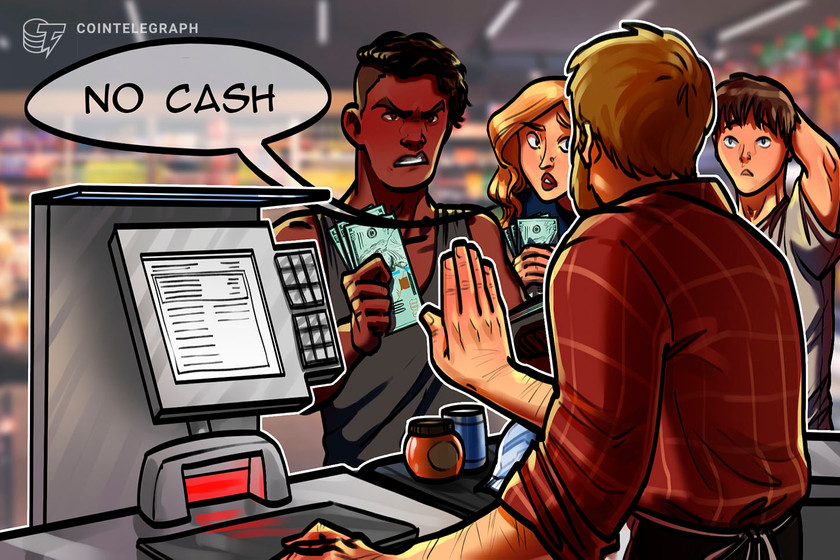 A society without paper money might be a less equitable society. Those lacking digital connectivity would suffer.

In Sweden, cash in circulation represents only 1% of the country’s gross domestic product, and some experts predict the nation will go “totally cashless” by 2023. In China’s largest cities, over 90% of people use WeChat Pay and Alipay as their primary payment method, with cash a distant second.

It may seem that the transition to a world without paper banknotes and metal coins is inevitable, but this week, a survey reminded us that reports of hard cash’s death may be greatly exaggerated. The study by Genesis Mining, titled “Perceptions and Understanding of Money 2020,” reports that 60% of Americans are opposed to the idea of paper money being replaced with digital-only money. “Americans are not psyched about parting with their paper money on a permanent basis,” commented Genesis CEO Marco Streng.

How does one account for this result if the march to a cashless global society (i.e., where cash is not a generally accepted means of payment) is inexorable, as some — including Jonas Hedman, a professor in the Department of Digitalization at Copenhagen Business School — have posited?

“There are several reasons for this,” Hedman told Cointelegraph, including “lack of trust in the central government and a poor payment infrastructure at the national level [in the U.S.]” Richard Holden, professor of economics at the University of New South Wales, told Cointelegraph: “The ‘greenback’ is iconic in a way that other currencies — perhaps with the exception of the British Pound — are not.”

Cash may stay around for a while

But maybe the United States is not just an outlier, and there are serious reasons why “cashlessness” might not burst forth overnight. A digital-only dollar could be perceived “as an incursion on privacy and individual freedoms,” Vinay Prabhakar, vice president of product marketing at Volante Technologies — a financial solutions provider — told Cointelegraph.

A cashless society may also discriminate against the poor, as Vlad Totia, a payments analyst at analytics and consulting firm GlobalData, told Cointelegraph: “A digital society requires people to at least have access to a device and an internet connection in order to manage their personal finances.” But many in the U.S. and other countries still don’t have this access, so eliminating cash risks further disenfranchising society’s least-well-off members — exacerbating income inequality.

There may be psychological barriers, too, Holden noted: “People have been using cash for a long time, and it has required a mindset shift to move fully away from cash. But many young people literally cannot imagine a world pre-iPhone.”

The world’s advanced economies would benefit significantly from going cashless, Holden continued. Digital payment schemes could curtail tax evasion and reduce illegal transactions that often take place using cash. Holden noted: “Cash is clumsy in many ways: it is slow during transactions, and handling cash is time-consuming and involves costly insurance for businesses.”

Hedman has conducted research to show that Sweden is on course to become the world’s first cashless society by March 2023 — but that research was done before the coronavirus pandemic. Has his timeline changed? “Cashless will come much earlier,” Hedman told Cointelegraph. “Cash usage has dropped significantly during Corona.”

Totia agreed that COVID-19 has given a boost to the cashless trend. “Lockdowns, temporary closure of businesses, people not going out of their homes, ordering groceries at home. […] All of these aspects have pushed people into using online banking and payment methods more because quite simply you can’t use cash much in these times.”

There is a hygienic aspect too. A 2017 study in which researchers tested $1 bills that had been circulating in New York City concluded that “money could potentially mediate interpersonal transfer of microbes.” People don’t want to be touching bills that have circulated through many hands during a coronavirus pandemic, noted Totia, adding:

“However, the biggest bump in users have been people who were either too reluctant, comfortable, old or too used to paying by cash. These new have been basically forced to use a more convenient and easy method of paying […] and most will likely keep using these services after COVID-19 has passed.”

“Cash can be easily lost”

Prabhakar told Cointelegraph that digital payments are intrinsically more secure than cash, which can be lost and forged — and recovery is almost impossible: “Most digital transactions offer various levels of security and repudiability, e.g. the ability to dispute a credit card charge, which cash cannot compete with.”

There is also the matter of traceability: Mainstream cashless transactions carry essential information about the payment participants, including what was purchased and when the transaction occurred. “This makes money laundering and tax avoidance much harder,” Prabhakar added.

Digital payments are, possibly, more environmentally friendly. “Cash and metal coins use up precious natural resources, some of which are non-renewable and only recyclable up to a point: paper, copper, zinc, nickel, among others,” said Prabhakar. “In fact the cost of producing at two denominations — nickels and pennies — exceeds their face value. Digital transactions have in comparison zero environmental impact.”

Digital payment proponents also make the case that time is money, so faster payments should boost overall economic activity. According to Totia: “Cashless, mobile or QR code payments are a lot faster than paying by cash. For your average coffee shop or street food van, time is of essence at rush hour when serving long queues of customers. Saving even a couple of seconds for each customer results in more sales at the end of the day. Apply this to all small and medium businesses in a certain country and you have more economic activity.”

Hedman’s study of 750 Swedish retailers found that when cash transactions are less than 7% of the total payment transactions, the cost to manage cash is higher than any profit made on cash sales. “When this happens, an economically rational retail management should stop accepting cash.”

A circumstance “ripe for dystopian exploitation”?

But surely, there are disadvantages too. “Many of the drawbacks or dangers of cashless payments derive from the same source as their benefits,” Prabhakar noted. Traceability might make it more difficult for criminals to carry out their trade, but it might also be hurtful to honest citizens who have good reasons to keep transactions private, he said:

“By paying for certain types of medication — birth control [pills], say — with cash, the payer can be confident that while their pharmacy or doctor knows of the purchase, their credit card company or mobile phone provider does not. A centrally controlled digital currency would mean the government having access to every transaction made by everyone in the country, a situation ripe for dystopian exploitation.”

Also, while a digital money economy may reduce fraud in the aggregate, it could introduce new fraud risks in the short term that could cause widespread distress. “Until the bulk of people using a new technology learn the ropes of how it functions, fraudsters will target these points of least resistance that come with a new app or device,” said Totia. “Fraud will not necessarily be more common or less common, it will be different and in the short term.”

Many accept at face value the proposition that a cashless society would be a less crime-ridden one. Friedrich Schneider, a professor emeritus at Austria’s Johannes Kepler University, has conducted extensive research on this question. His findings have shown that anonymous cash makes tax evasion easier, especially for those who cannot afford to shift funds abroad, but it is not the main reason for tax evasion, and so, it is unlikely to eliminate it.

“As has been shown in India, it is naive to think corruption and money laundering will end through digital means. If anything libertarian-style crypto currencies such as Bitcoin are more amenable to these activities.”

Perhaps a more worrisome concern is that a cashless society might be a less equitable society. Martin Chorzempa, a research fellow at the Peterson Institute for International Economics, told Cointelegraph: “The elderly, undocumented, and other more vulnerable members of society would face immense challenges if paper money were entirely eliminated, as Sweden has discovered.” Meanwhile, Totia believes that the risk of lower classes being economically ostracized is “the only strong disadvantage I see” with eliminating cash.

Batiz-Lazo noted that “The COVID-19 pandemic might have increased the demand for cash by people in the lowest income strata and those living in rural areas,” and he sees danger in “attempts to rush the UK economy to rely solely on contactless and digital payments.” Prabhakar worries that a cashless society might exacerbate income inequality, hurting socioeconomically disadvantaged minorities, workers in service industries — who are often paid in cash — and others who “have neither the access to the banking system nor the technology tools to fully participate in a cashless economy.”

Will Sweden lead the march?

Still, the movement toward abolishing paper money appears to be accelerating, as has speculation about which country will achieve it first. Totia stated: “Sweden has a lot of political policies focused on moving the country to being cashless, and this might just make it the first.” However, he also noted that Finland has a chance as well, especially when considering it has a smaller population. Totia’s top three, in order, are Finland, Sweden and China:

“China is more complicated due to the fact that it has 1.4 billion people, However, QR code payments are extremely popular, even in more remote rural areas. Other strong candidates for going cashless within the next years are South Korea, Norway and maybe the UK.”

“China or Sweden seem the most likely alternatives to me,” opined Holden. “If Singapore wanted to do it I think they could pull it off very quickly given their advanced payments system, relatively small size, and strong central government.” Meanwhile, Prabhakar believes that: “In Asia, South Korea is a contender, with a smartphone penetration of 95% and the world’s fastest broadband facilitating adoption of digital payments.”

Government support may be needed

In sum, any global movement to abolish paper money is bound to be halting, with starts and stops. COVID-19 has accelerated the process, bringing on many new digital payment users. Still, some government intervention or support in the form of subsidies may be necessary to deal with the inequities that a cashless society might bring. “There is a big risk that people who are not tech-savvy or simply do not have the funds to buy and maintain a smartphone will essentially be kept outside of the active economy,” according to Totia.

Cointelegraph asked Hedman if he still believes global cashlessness is inevitable, as he declared before the pandemic began. “Yes over time it is inevitable,” he answered, “but in contexts where you don’t trust the government there will always be situations for decentralized solutions — cash. But fundamentally it will be a choice by consumers whether to pay with cash or not.”